Day before the BIG day...

Sitting trying to get ready to get away and tumble around in the last minute x-mas shopping with LOTS of others...puh! Strength is needed for sure!

So, maybe I should use this pose today if people are stressed and pushing me around?=) 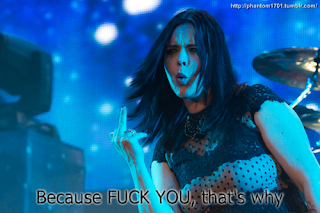 This picture made my day ;-)
Have a great day and remember, the others are as stressed as you are.
Love, Betty

Xexe, I like this photo so much! I feel the same right now and wanna kill people who give me bad energy and stress, so I completely support you Nettie with this post and let them go to hell with all their negative stuff! Try to enjoy this day still=)

Of course, strength is needed... but anyway, x-mas duties and things are so nice =)

Thanks for funny picture! =)
Good luck!

What a photo!!! When was it? And why did you use this pose? :/ some "fans" being rude with you?!
This photo seems to be from the Imaginaerum tour I think!

Bon courage as we say here to find all the gifts among the crowd... I woke up early to buy some and there wasnt so many people in the morning :) and now Im at work till 21:15! Puh!

This picture also made my day :) I can't say I haven't used that attitude while doing x-mas shopping before ;-)

Have a lovely day preparing for x-mas!

This is an awesome pic.

And please forgive me for the swearing, but I'm hurting a lot.

Though this pic would seem appropriate for something I'll be doing tomorrow, hopefully with my best friends backing me up, I have reasoning much better than 'Because FUCK YOU, that's why'. I'm taking to task an arsehole who's bullied not only me, but some of my best friends, and this bitch has done this shit to us for more than 12 months, it's on an internet forum, but the Iron Maiden Fan Club forum, which is a paid subscription forum, which it's been occurring on, is rather tight knit for some. I'm more or less blowing off some steam, but I know you're against bullying, to continue anyway, this woman gets all pissy when we post off topic in a thread that is about Janick Gers, even one post off topic and she's all pissy at everyone and making snide comments. The worst she has done, just in my books, was when my grandfather was dying, I was in this thread because I wanted my friends to support me when I was losing a family member, but no, this chick, she didn't say a word to me, and I KNOW she knew exactly what was going on, but no she fucking well had a go at me and my friends for posting off topic, cos y'know apparently me losing someone I care about isn't relevant enough for any thought or compassion at all, fucking NONE from her! Not a single fucking word of compassion, NOT ONE SINGLE FUCKING WORD!

Thank you if you do publish this, despite the foul language, anger, and probably poorly constructed paragraphs.

But to finish this. Because FUCK YOU ***, YOU SELFISH, SOCIOPATHIC, SPOILT BRAT, BULLY AND DOWNRIGHT FUCKING COWARD!

Thank you Anette. Since Oct, you have done more for me than I can say regarding my mental issues, you are one of the reasons why there are no scars on my wrists from cutting, or any other lasting damage from self harm.

Thank you for listening to me again when I'm losing it.

Haha that picture also made my day ;-)

Great pic. Sometimes that's the only thing we need.
Have a nice day :)
kisses ♥

And here's an X-mas greeting for people who annoy you :p

Made it myself. I want a t-shirt of it.

Hah :) Been there.... Was a horrible experience! Now at home, and I am NOT going anywhere for a few days:) Anette, now you just relax, take a glass of wine, watch your family, read a good book, eat chocolate, or watch something easy on the telly :)

Have a really good and relaxed evening

Oh sh*t, Anette is mad... whoever is doing this. DON'T PUSH HER AROUND DUDE! haha but anyway i laughed i lot looking at this picture and know it's my phone wallpaper because i need this on daily basis! ;)
MERRY XMAS TO YOU ALREADY SWEETHEART, don't know if i can come write here tomorrow so, wish you the best day ever tomorrow, hope you have lots of fun and also a nice evening with your loved ones ...and also lotsa gifts haha i mean its cool have fun with our family but the gifts part it's even better so.. i wish this to you too haha

Love you sweetheart, have a nice day and good day at shooping and DON'T PUSH HER AROUND! haha
<3

What's in the picture?
Enjoy your day:)

Hi Anette :-)
This pose is just right, the right one for me today ;-)
I think a lot of people currently have stress. The stress we make our own but unfortunately even though I do not celebrate Christmas I will be infected by the stress.
Have a nice day.
hugs and love

that's the attitude! love that picture (:
no one will stop you! have a nice day nettan! :D

yeah nettie, thats the same pose I would use for this "forever alone complex" which started to invade me since last night :( god jul :D

I loved waking up and seeing this! Totally made my day :D I hope all your shopping goes well. And a tip I always do if I am really stressed is taking a nice hot relaxing bath and lighting some candles. Always calms me down after a stressful day.

P.S. Can I just say I loved whenever you had your hair black or a really deep red. Any chance you will go back to those colors?

Hello Anette. A very funny picture.
Today I am sad because yesterday I found an injured cat on the street, and I am very sensitive to animals.
Christmas has arrived!
Hope you enjoy Christmas with your loved ones.
kisses

I just found this picture of you yesterday and I was wondering what went wrong, that you, such a kind person, have to show the gesture. But I love that photo. I think I should use this fnger more and I could save a lot of angry words and my nerves.

Sending a lot of strength and I will keep my fingers crossed for you to do everything you need to have perfect day tomorrow.

i really love when you do that!! hahaha

by the way happy holidays Anette!! :)
hope you have a beautiful day with your kids, johan & with your family!!

haha I laughed a lot in this picture, this season is all sold out anyway but keep calm is Christmas after all! Enjoy with your family

haha same here. People running around like chickens. Cool picture ;) Dear anette, there is just day left before christmas. And i can't give you a christmas present but i would like to say thank you. For all the beautiful years with nightwish, for everthing else you've done, for spending time with us in your blog and thank you for being the way you are. People like you make this world a better place. I wish you a wonderful christmas time with your loved ones. Big hugs from switzerland :)

Yes, X-Mas shopping means always stress. I wonder that shops seem to have open today in Sweden, here in germany they are always closed on sundays. Well, I have to get the last things for x-mas tomorrow, so I hope this won´t be too much stress and I ´ll be one among only a few people who buy the presents always at the last occasion :)

Take good care of yourself please Anette and relax a bit, you deserve it!

Haha! Good one. Love it! Give them hell, Anette!!

ahahhahaha Nettie you're great!! :D hope you have a wonderful evening...I'm going to the cinema to see "the Hobbit"...I'm so excited because I was looking forward since 2007 when they announced the film would have been realized!!!The year before I red the book, and the lord of the rings too of course...I'm Tolkien addicted =)kissessss ^^

That picture is kind of strange... Or something. it makes me hate it, not you, that middle finger. Haha. Happy christmas Anette! I hope that I 'm gonna see you sometime. By the way, are you going go to Finland next year?

Oh that picture is just awesome!
Totally made my day hehehe!
Have a great day and don't stress yourself out. ;-)
xoxoxo

I didn't recognise you at first!

You're like an angel on this picture! http://24.media.tumblr.com/tumblr_lzw1qrsRbh1qez3dho1_400.jpg I really love the top! Do you remember where you had bought it please?

Have a gothic christmas! https://www.youtube.com/watch?v=aDa4GlInwaE

Yes use the pose if people try to push you around. :D

OMG this picture is just epic!!! I usually am not the "rude reply" type, I don't think that being vulgar and violent solves anything, if someone is aggressive or unfair with me, I try my best to keep my composure and reply as subtle as possible, even if I am upset. But sometimes it is just too much and when I get too much pressure, shouting "sh*t" or anything else does good too!

A picture that reflects my daily attitude, thanks, made my day :) you rule :) I hope you had a good time while shopping and you didn't need to use that pose :)

Ahh Anette you're such a force of nature sometimes! ;-) That photo is brilliant! Sleep tight and hope shopping was piece of cake!!

of course you can use it ♥

merry xmass to you and your family too ♥

It made my evening.

hahaha i love the picture xD

This picture made me laugh! :)
Your blogs always make me happy, no matter what the mood is. :)
Don't ever let anyone get you down!

You're such a wonderful person, Anette. I hope you, and your family, have a fantastic Christmas, like you deserve! :]

Hahahaha! That is fucking brilliant! Its good to see you didn't take any shit. I can imagine there must have been some ignorant little shits in the audience that day. I have to ask though, were they shocked to see you return the finger? I bet they couldn't believe their little eyes. Have a lovely evening dear. James x