yesterday me and Johan had the pleasure of going to a concert with CAROLA, the singer that some of you might know from winning the Eurovision concert some years ago. She´s been my inspiration as a singer from I was young and I´ve seen here a couple of times during the years. Last time I saw her was also a x-mas show from the album recorded in Betlehem.

This x-mas she´s released a new album and I hadn't heard more than one song before we went and it was nice to not knowing how it would sound. The album has been said to be more intimate and different from her other albums and I must say that I agree. And in a good way I have to add!

Carola is known for her amazing strength in singing and these songs were so soft, so gentle and with such emotions that not only I cried during several songs but also some big men sitting next to me cried. She talked between the songs about her childhood x-mases and both her parents passed away some years and she talked a lot about her father. When she sang the song dedicated to him I cried so much that I almost felt I had to go to the toilet but I had to really breathe through it and cope=) The song is called VINTERSÅNG

THAT is for me what a great concert is about, touching someone as she did last night.

A truly amazing album and I´ve listened all day long and have so many favorites but the song to her father VINTERSÅNG and TRO PÅ EN MORGON are so amazing! 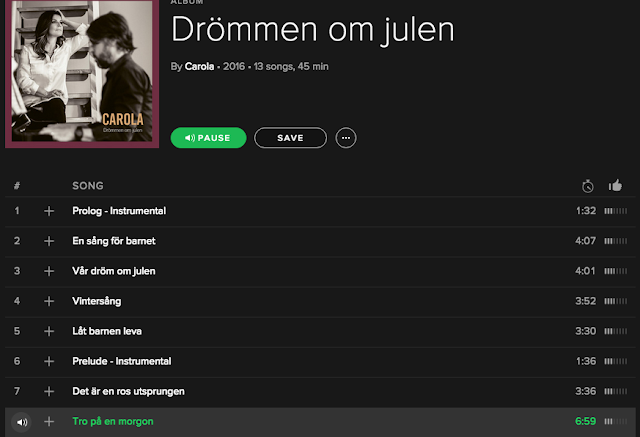 Blessings,
Anette
Posted by Unknown at 21:02

i guess, i'm an eurovision addict, because i did not even need to read your post, i saw the name carola and "eurovision" popped up in my mind... ;) thanks for your post, i'll try to listen to that last album tommorow.
i love you <3

i have to thank you for thispost. i listened a few samples on amazon mp3, it was so beautiful..... i have to wait until december 5th, but you could be sure i will treat my ears wwith that jeweL.

Hi Anette!
I didn't really know how else to write you other than a comment on your blog. I teach glass blowing at a university and I was discussing with my female students how important it is that they don't shy away from working in a very male-dominated field and that we need more strong women role models in general. So we started talking about who we looked up to (at this point we weren't really blowing glass anymore), and there were plenty of Disney princesses and fictional characters, but not so many actual people, and then you came to my mind.
I've followed your blog for so long and they way you live your life is so inspiring. That you follow what you want, your ability to commit to things (you got me running again) and how strong and graceful you are in your self-worth are things that I admire. You have a wonderful energy and you were quick to come to my mind when I wanted to think of an actual person who is a strong female role model.
Thank you for being you and have a great day and a wonderful holiday season with your boys.
Love and hugs,
Caitlin